The Creation of a Cannabis Seed: Genetic Lineage & Plant Classifications

There are many reasons to breed cannabis plants. One reason is to create a plant with similar characteristics to a variety you know and love. Another reason is to create something new, unlike a plant in anybody else's garden, whether it's achieving desired cannabinoid content, improved terpene profiles, increased yield, ability to withstand environmental stress, or increased aesthetic attributes. There are several ways to breed a plant to achieve these goals. First, you have to understand a plant's genetics. A cannabis plant's genetics are largely classified by where it came from and what its genetic makeup is. There are separate female and male plants. A female produces the flowers we are all familiar with, and seeds. A male produces smaller non-consumable flowers, known as pollen sacs, and pollen. When seeds are produced by one plant, each seed sprouted will produce slightly different characteristics, but also similarities, to the mother and father plants. This is due to each seed having a unique genetic sequencing, just like children from the same parents. 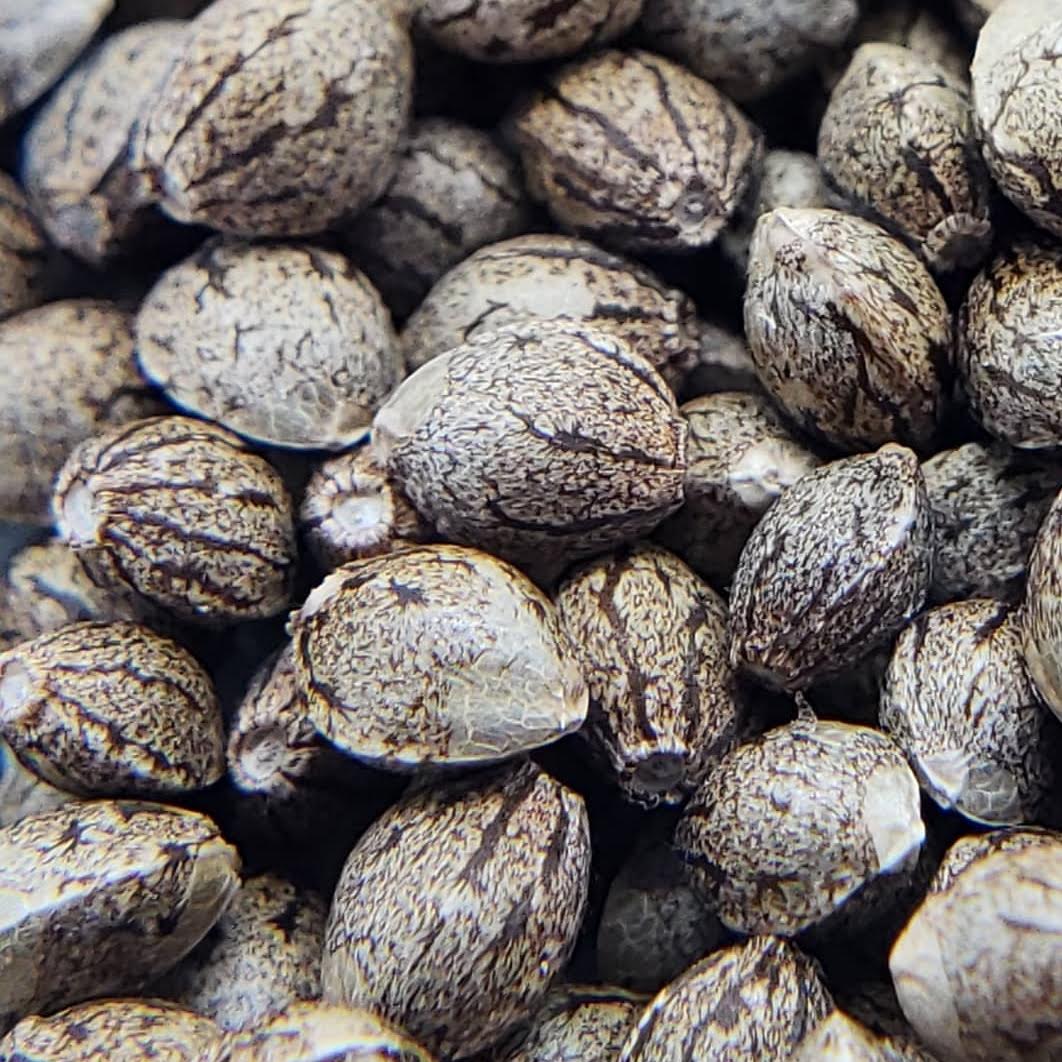 Genotype - A genotype is a plant's complete heritable genetic identity; its genetic code that determines growth, appearance, and observable characteristics. It is the unique genome that would be revealed by personal genome sequencing. A gene or set of genes carried by an individual plant. Phenotype - Physical characteristics. Largely influenced by the environment in which a seed is grown and how it interacts with the seed's genotype. Phenotypic variation - Phenotypic variation (due to heritable genetic variation) is a fundamental prerequisite for change through human selection. It is the unique plant as a whole that contributes (or not) to the next generation, so selection affects the genetic structure of a population indirectly due to the contribution of phenotypes. Without phenotypic variation, there would be little change through human selection. genotype (G) + environment (E) + genotype & environment interactions (GE) → phenotype (P) Landrace - A pure cannabis strain cultivated in its natural environment which has never been crossbred with another variety, either 100% pure sativa or indica. Rarely seen nowadays. Hybrid - A mix of two varieties that cannot be related in any way; for example, a cross of a Landrace Afghani Indica and a Landrace Highland Thai Sativa. As the cannabis plant’s gene pool becomes more diverse in the modern day of breeding, there is an increasing variety of poly-hybrids. Poly-hybrid - A cross between two hybrids. Most of today's popular varieties are poly-hybrids. Filial generation - In a breeding experiment, a generation that is successive to a cross between parents of two distinctively different but usually relatively pure genotypes. 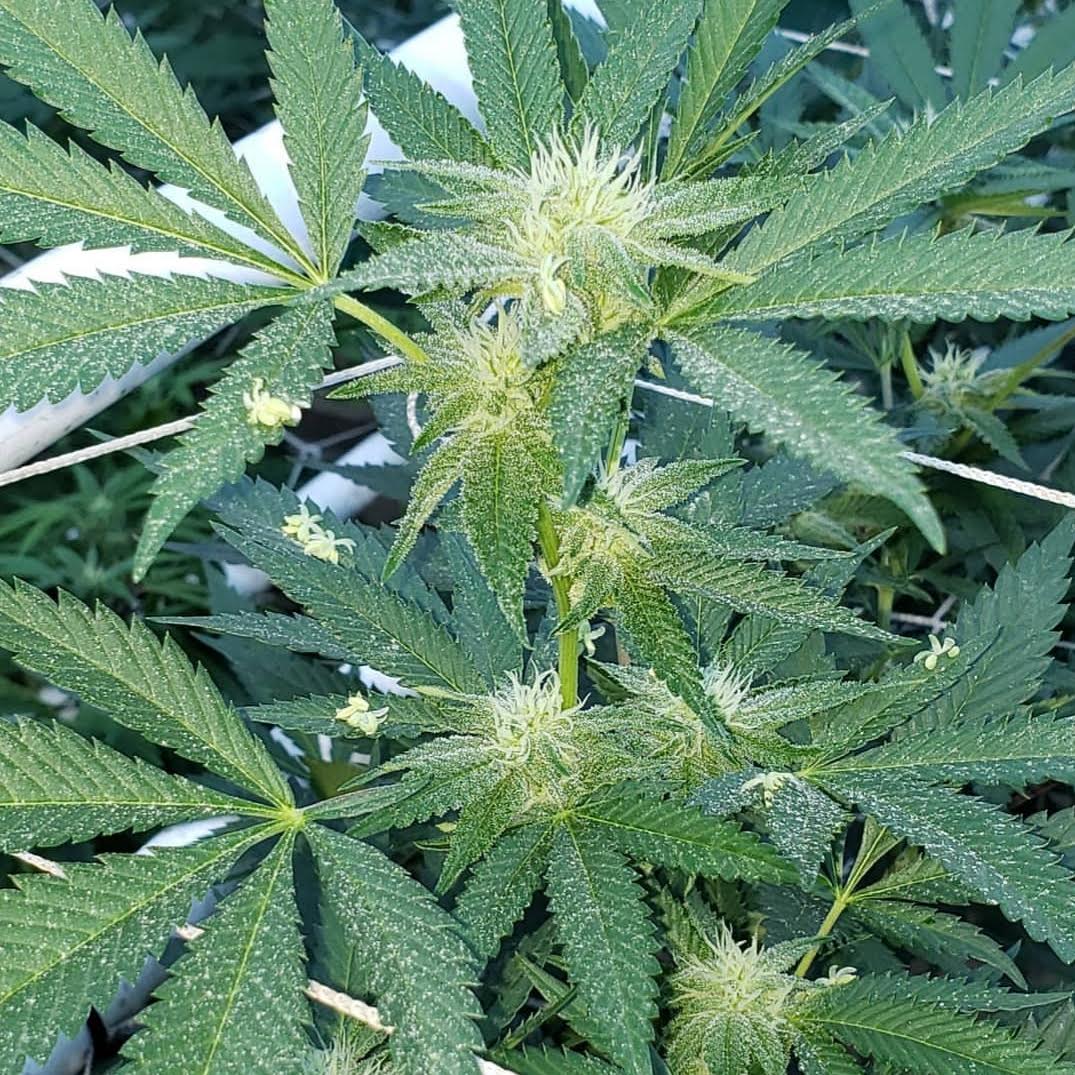 A female plant (Zkittlez) dusted with pollen; the creation of cannabis seeds

F1 - Mother x Father (no known shared genotype). This is the combination of two genetically different genotypes. There will be multiple phenotypes from both parents. The resulting hybrid F1 seeds within these phenotypes' sub phenotypes will exist and will carry mother-dominate genes, father-dominate genes, or a mixture of the two. F2 - Hybrid F1 (Sister) x F1 (Brother). The most unique genes from a hybrid or poly-hybrid will be expressed in these seeds. The search for unique, older hidden traits will most likely be expressed in this seed generation. Parallel line - At this point of the selection and creation process, it's best to create parallel lines; where you take two completely different phenotypes that you enjoy. The object is to preserve specific traits that are different attributes from the same F2 seed stock. This is to ensure genetic integrity once you begin the two separate F3 projects. F3 - Hybrid F2 (Sister) x F2 (Brother). The goal here is to select for the desired phenotypes found within the hybrid to lock those into the next generation. F4 - Hybrid F3 (Sister) x F3 (Brother). This will now be a true breeding line that has been worked to the minimum level needed to create consistent phenotypes of the desired cannabis plant expressions. Once you have made it to F4, it's great to take your two parallel F4s and work them into each other rather than continuing to F5. This is where we expect the most exquisite of flavors to exist. 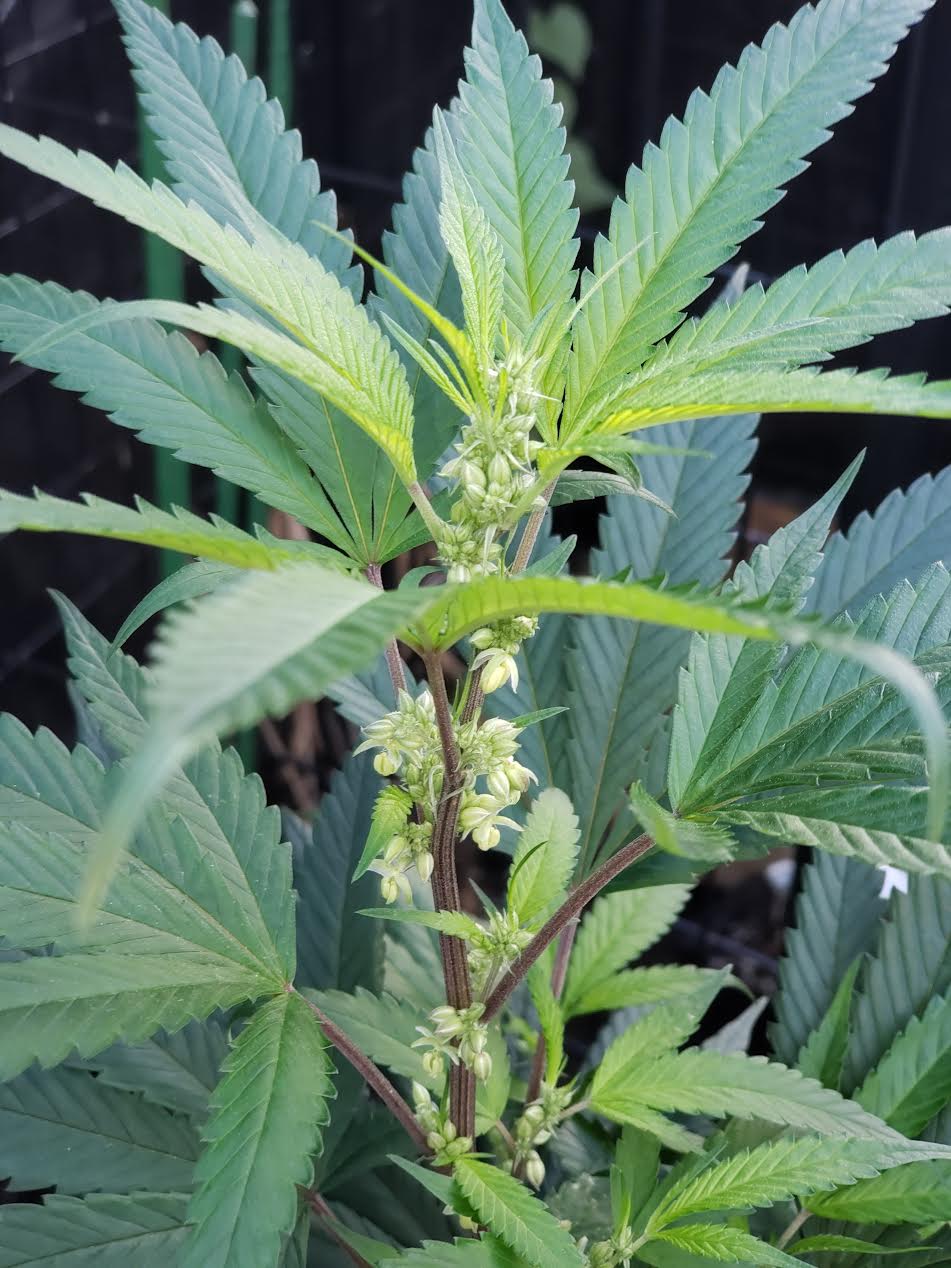 An in-bred line is a nearly homozygous line obtained through continuous inbreeding, accompanied by selection. There are two ways to in-breed a plant. The traditional method is an F1 outcross that is then in-bred back to the original mother plant. The second method is self pollination via Colloidal Silver or STS. The final, not recommended, way to in-breed is a fully hermaphrodite plant naturally pollinating itself. This is highly discouraged and a big contribution to today's unstable varieties. Backcross - Crossing an F1 Hybrid back to the original mother plant. BX - Mother x F1 Male (Mother Clone x F1 Father). This is the first step needed to produce a true breeding IBL, but nowhere near considered a true breeding line at this point. Expect to see 33% Mother, 33% Mix, and 33% Father phenotypes at this point of the process. BX2 - Mother x Father BX1, which when worked properly through mass selection, is one of if not the most important selections to create stable true breeding IBL. BX3 - Mother x Father BX2. These will become much more uniform and allow for great consistency, but not a fully worked IBL. Expect above 60% of the phenotypes to be mother-dominant. BX4 - Mother x Father BX3. These will be the first step of a true IBL that will be extremely consistent. Expect 80% of phenotypes to be mother-dominant and is the step to reaching a true breeding IBL. IBL - A BX5 or true IBL. More than 90% of phenotypes will be extremely similar to the mother plant. This takes years, and careful selection. This is our goal and we invite all of you to follow along as we research and develop new varieties of souvenirs. Selfed (S1) - Selfed seeds, also known as S1 seeds, are Mother x Reversed Mother Plant and will create feminized seeds during this inbreeding. Crossing the same genotype to itself makes for little to no genetic variation. The more stable the parent, the more stable and consistent the offspring will be. When selfing poly-hybrids, expect more phenotypes, as the poly-hybrid itself is not stable. This method of breeding is also considered a non-traditional method of in-breeding a plant.

Through proper selection, it is possible to achieve better hybrids and poly-hybrids than either the mother or father genotype. These are the steps we will take to build our genetic library and hope these souvenirs will be preserved for future generations to enjoy.

If you would like to know more about any of the above information, please contact us.
Mahalo from the Garden Isle.